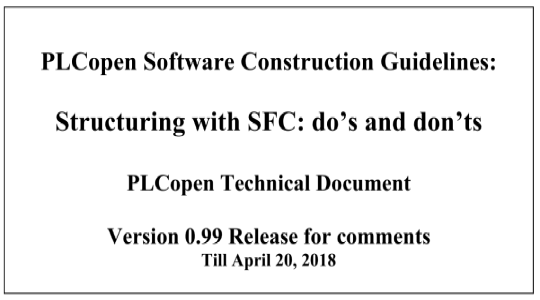 This document explains the advantages of Sequential Function Chart, SFC. This is a very expressive graphic formalism of the IEC 61131-3 standard. It is not considered a programming language as it needs other languages to express transition conditions and actions.

SFC provides a means for partitioning a programmable controller program organization unit into a set of steps and transitions interconnected by directed links. Associated with each step is a set of actions, and with each transition is associated a transition condition. Since SFC elements require storage of state information, the only POUs which can be structured using these elements are function blocks and programs (not functions).

Whenever a sequential process shall be controlled, SFC shall be considered as most suitable for structuring the internal organization of a POU especially in the Functional Description

To make it possible to include your feedback and your comments on the usability of this specification, it is now made available as a V0.99 – Release for Comments. The deadline for your comments is April 20, 2018. Comments can be made directly in the pdf file and sent back.