Since the release of the IEC 61131-3 programming standard, users want to be able to exchange their programs, libraries and projects between development environments. Although this was not the intent of the standard itself, it was a task that the independent organization PLCopen committed itself to.

IEC 61131-3 defines programming languages. As such it is just a part of a total solution. Other parts are tools for simulation, debugging, version control, documentation, networking and more. PLCopen has decided years ago to realize interfaces towards these supporting tools. This resulted in a workgroup named TC6 for XML (eXtensible Markup Language). This committee defined an open interface which can be used by different kinds of software tools to transfer the information that is on the screen to other platforms. This screen information does not only contain textual information, but also graphical information, like where the function blocks are and how they are connected to each other.

In 2014 we entered a new phase for this document. Through the German DKE, PLCopen handed over its intellectual property rights on the schema, specification and documentation to IEC. After successful consultations, an IEC committee started the work to publish the PLCopen XML specification as IEC 61131-10. With the release of the 3rd edition of IEC 61131-3 a major overhaul was needed to include the changes and extensions like object oriented features.
This XML exchange format enables a transfer of IEC 61131-3 projects, from an exporting environment to an importing environment, including extensions for layout and formatting.
The document defines a solution independent eXtensible Markup Language (XML) based exchange format, to be supported by interfaces of different kinds of software tools. Besides textual and program logic information, it also provides the ability to transfer graphical representation information, e.g. the position and size of function blocks and how they are connected. The design of the ‘transferred’ parts shall represent the same program logic, however it may be altered in look and feel. The XML exchange format provides for life cycle management of automation systems, e.g. in case of redesign, maintenance or device replacement. If an IEC 61131-3 project is stored in this standard’s XML exchange format, it could be reused independent of a special development environment. And thus, it could be modified and maintained by any other development environment supporting this standard’s XML exchange format. 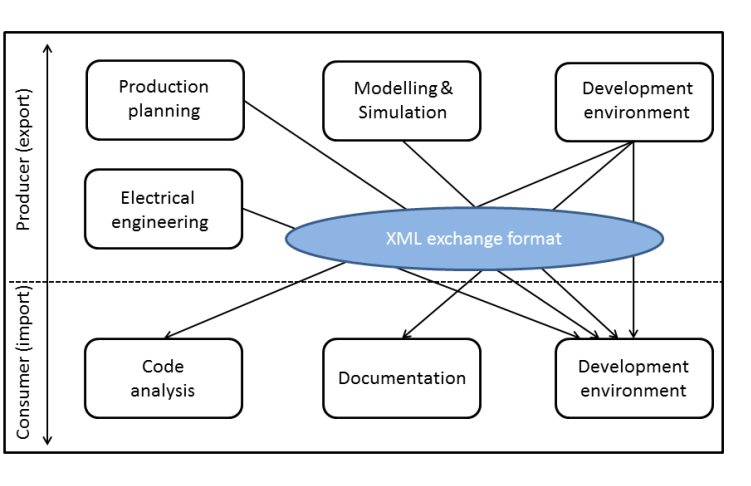